Mother and Son Find Hope to Enjoy the Beauty of Life 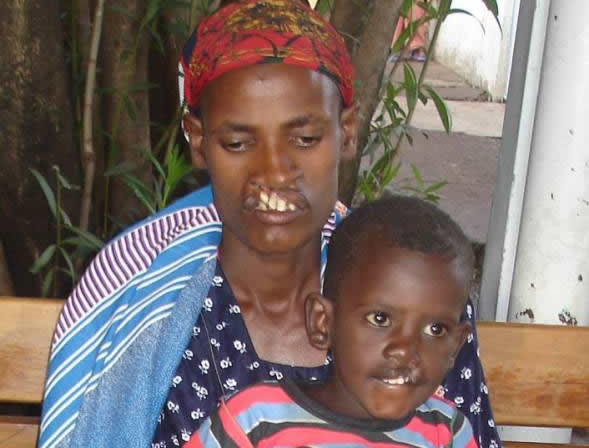 Likinesh Hurma, a 35 year old mother of four, lives in a village about 60km from Arbaminch, a small town 500km south of Addis Ababa, the capital of Ethiopia.

Likinesh was born with a cleft lip deformity that was considered a curse in the family. Consequently, she was not given a chance to go to school. She was also teased by her peers. Growing up, her life revolved around cooking for her family, collecting firewood and fetching water.

To her surprise though, she received a marriage proposal when she was 20.

“How would a man marry a girl like me with such a deformity in the middle of the face?” she asked herself.

In spite of the doubt, she got married and had four children. It is only after she was married that she came to know that her condition could be corrected surgically. However, this service was available only in Addis Ababa. She did not have the money for either transportation or hospital bills. Nor could she speak the language spoken in the capital city.

Likinesh was stressed by her condition and avoided socialising as much as possible. She tried to avoid gatherings and marketplaces since she felt uncomfortable with the staring. Worse still, her third child Essayas (a boy) was born with cleft lip. This brought additional shock to the family. Essayas is now four years old.

In January 2008, Amref Health Africa reconstructive surgeons with the support of Smile Train USA visited Arbaminch Hospital to do cleft lip and palate operations. The visit was announced through local radio, inviting all patients in the region for free corrective surgery at the hospital.

Likinesh decided to go, and to take her child with her to see if they would get some help. It took her seven hours to reach the hospital, travelling half of the journey was on foot and the rest by minibus on a bad murram road.

When they arrived in the hospital compound they found more than 30 cleft patients waiting to be screened. Likinesh and her child joined the queue. After screening and blood tests, they were both declared fit to undergo reconstructive surgery.

“I would like to see the result on me first and then I will decide if my child will go for the surgery.”

She must have liked what she saw because both of them were operated on, as well as 26 other patients. After the operations a smiling Likinesh said:

“I am extremely happy that my child will not go through the suffering I have had to endure. I will send him to school right away.”

She appreciated the work done by the Amref Health Africa and Arbaminch Hospital teams to improve their lives better.