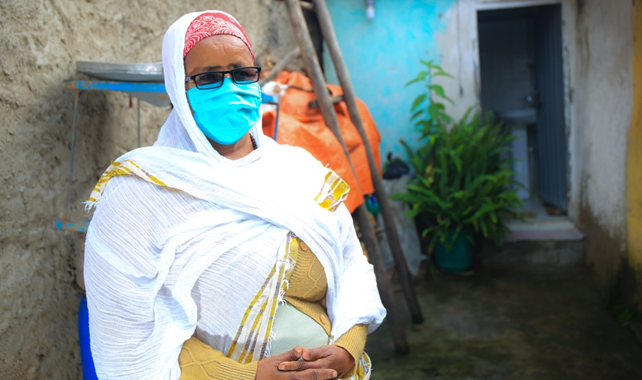 Rahel Tareke, a mother of four in Adama city in the Oromia Regional State, recalls the tiring challenges that she had endured due to the lack of household pit latrines. “Imagine having no household pit latrine while living at the heart of one of Ethiopia’s major cities,” Rahel shrugged, as she stressed the health and social trauma that she suffered for lacking a pit latrine.

“Even the community latrine that we relied on for years, went out of service ahead of time due to a growing number of users on the absence of latrines at household level, giving us no other option but either to use flying toilets or practice open defecation,” she said.

For more than two years, Rahel and her family members were using flying toilets at day time while practicing open defecation at night. “It might sound exaggerated to say this, but there was a time that I was afraid to eat food just to avoid going to the toilet before sunset,” she said

Left with no other option, Rahel and others in the area had tried every possible option available at their disposal – from regularly visiting restaurants and cafes all the way to throwing faces tied with plastic bags along the street-sides.

Rahel was among the first beneficiaries of the project. “Since I was financially unable, I never thought that I would be able to have my own toilet constructed inside the premises of my house,” she said.

“However, when they briefed me about the financial opportunities available and the low budget that was needed to construct the toilet, I was convinced that it is realist that I would have one,” Rahel added.

The FINISH Mondial Project, among other things, envisaged sustainable expansion of access to and demand for sanitation facilities through financial inclusion and thereby improve health status and socio-economic growth of communities. As the weight is off from her shoulders, Rahel now cherishes the improved sanitation system that transformed her family’s health and social condition for better. “Those difficult days are gone now. Besides the lifesaving health aspects, the toilet has given me a proud moment as I’m no longer worried about the social exclusion for experiencing open defecation,” Rahel stressed.